In looking at the young career of 17-year-old jockey Bryson Butterfly, it is ironic that one definition of the word ‘reservation’ is ‘keeping back, withholding’. 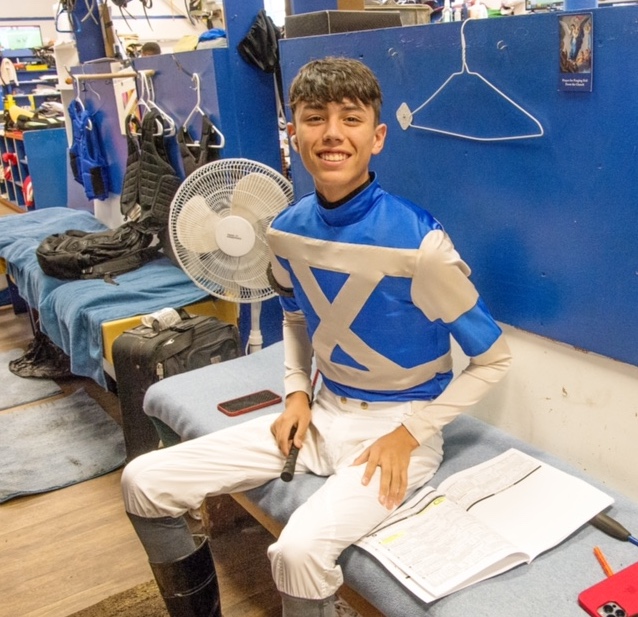 Butterfly, a native American Indian, came off the Colville Indian reservation in northern Washington state and isn’t keeping anything back or withholding any effort establishing himself on the tough Maryland/mid-Atlantic circuit since moving there 12 months ago.

In his second full year as a jockey, Bryson’s earnings at the time of writing topped $1.1 million, more than doubling his purses in 2021, from 29 winners.

Pretty good for a teenager with a background not necessarily conducive to a burgeoning career as a jockey and 2,500-plus miles from his home in Omak, Washington, in the Pacific Northwest.

‘Many kids won’t venture out into the world’

Bryson’s mother Amy Nelson is an ex-jockey who rode briefly in Canada and is now a Thoroughbred trainer currently stabled at Arizona Downs in Prescott. She suggests that many Indians remain on the reservation on which they’re born, saying: “Indian kids won’t venture out into the world to be somebody."

A generalisation, perhaps, but one grounded in a dark side of American history – broken treaties by the US Government with Indian tribes to enable land-grabbing by non-native Americans moving west. Eventually, Indians were corralled into reservations by the government, on land chosen mostly for them by that same government.Separation and segregation for native Americans is a blight on America’s history and, more important, its present as well. What it has not done, however, is to obliterate or squelch a vibrant horse culture.

This culture has produced, among other things, Indian relay races that may arguably be the most exciting horse racing on the planet. More on this later. 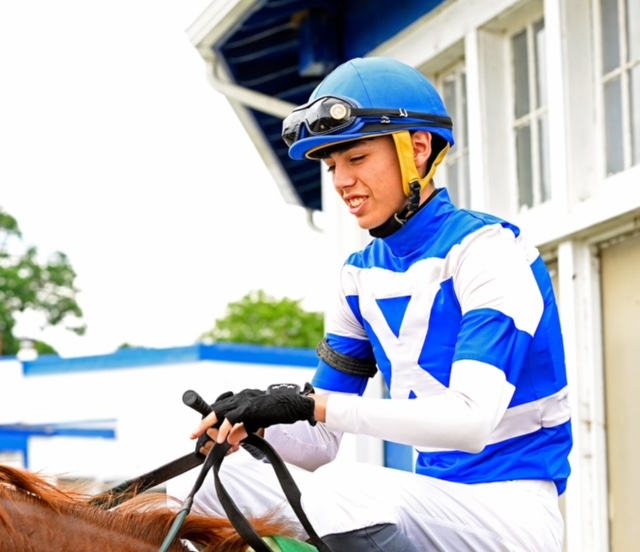 This culture also produced Bryson Butterfly via a family background that would seem to almost ensure horses and horsemanship. What made the difference for Bryson was exposure to life off the reservation through his mom.

‘Mom was everything to me’

“My mom was everything to me,” he said. “My brother has won a few championships in roping, and my other brother was riding Indian relay, so we’re all kind of a big part of horses.

“My mom is a horse trainer and I was galloping horses when I was eight. I rode my first gate race when I was 12. I owe it all to my mom. She was the one that helped me get here.”

Amy Nelson’s travels took to her to racetracks off the reservation all over the northwest and southwest. It took her son, too, at an age measured in days. “He went from the delivery room to the racetrack when he was three days old,” recalled Nelson. “Not only that, but he was on the back of a horse with me that very day.”

In short, ’Mom Amy’ did not miss a beat, aided by what she calls the “big family” at the racetrack. “Everybody pitched in and watched the baby,” she explained – plus Bryson’s older sister, Jaedyn Brady, who was four.

Bryson rode maybe more than he toddled as a growing baby; his mom bought him a pony when he was just barely one. “It was a miniature, so it was the right size for a little, little kid,” she recalled. “I think he was probably a year-and-a-half when he was riding that pony.”

Bigger things were ahead for Bryson with horses. “I hung it up [training] in 2009 just so I could take the kids junior rodeoing,” said Nelson. “That was when Bryson was four.”

He didn’t compete against kids his own age, however. “Usually, when you have your four-, five-, and six-year-olds they’re in the ‘little people’ division,” said Nelson. “They’re on a lead line and the parents usually lead them through their events. Not Bryson – he was at a higher level.” 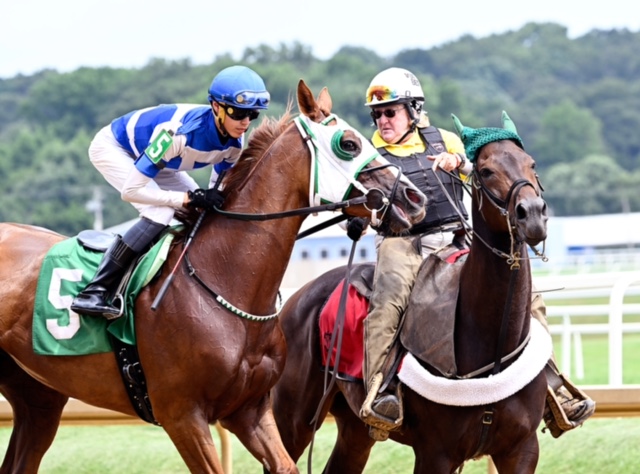 Warming up: Bryson Butterfly with an outrider before a race at Laurel. Photo: Maryland Jockey Club / Jim McCue

That may be an epic understatement. “He was rodeoing and running with adults at age five!”

More specifically, Bryson was entering races against adults on a full-grown Quarter Pony, a cross between a Quarterhorse and another horse breed like a Paint or Appaloosa that produces a horse shorter than a full-blooded Quarterhorse.

Nelson had used the horse outriding on racetracks. “I could outrun racehorses on him,” she said. “He was that fast.”

Bryson, in Amy’s words, was “almost instantly a prodigy,” winning everything he entered but his rodeo career was over right then and there. He wanted to go horse racing.

Amy takes up the story. “I sold all my rodeo horses, bought racehorses, and taught him how to ride, how to sit and seat and the basics of galloping,” she said. “He built on it from there.”

Indeed, he did. “I rode my first race when I was 12 on a Thoroughbred in Browning, Montana,” said Bryson. “I was nervous. It was my first time even seeing a starting gate or being in one.

“I didn’t have a jockey saddle or jockey boots and pants. I wore jeans, cowboy boots, and a t-shirt. I had an exercise saddle.”

‘I knew I wanted to be a jockey’

The experience cemented what Bryson wanted to do with his life before the race was over. “That first time ever out of the gate is when I knew I wanted to be a jockey,” he said, failing to add that he hit the wire first that day with Carson’s Fireball, a horse foaled in 2013 that is still running races.

What followed next was an exercise license at age 14, granted early and perhaps against racing regulations because of the racetrack’s familiarity with the young teenager since birth. That took him to Turf Paradise in Phoenix, Arapahoe Park in Aurora, Colorado, and Emerald Downs in Auburn, Washington, among other racetracks.

A jockey’s license came at age 16 at Emerald Downs after he had galloped horses there for six months.

It was shortly after getting his license that he rode for his mom for the first time on a Quarterhorse named L Bar D Classic Trip at Grants Pass Downs in Oregon.

“There was a horse in the race that had won seven times in a row,” said Nelson. “My horse had hooked that horse the year before but got a terrible ride so I knew I could beat him, but I needed a rider.

“As soon as Bryson got his license. I was running ‘L Bar’ in Arizona. I hauled him from Phoenix to Grants Pass for Bryson to ride him. We went 600 yards again and when they hit the lane, it was over. Bryson won by three-quarters of a length and set a track record by over half a second.”

Fork in the road

Before becoming a licensed jockey there was a proverbial fork in the road that included strong parenting from his mom. “I was failing out of high school, but I was working on the track, doing really good,” he recalled.

“My mom gave me the option of getting my GED [General Education Development credential equal to a high-school diploma] and working on the track, or just staying in school and focusing on better grades.”

Bryson chose the GED route with the full support of his mother. HIs move to Maryland came about through a racing fan at Grants Pass who happened to be a friend of renowned jockey agent Ron Anderson. “She mentioned to Ron to watch this kid,” said Nelson. “He started doing so and then got hold of us.”

Bryson had been riding in Ellis Park in Kentucky and Horseshoe in Indianapolis but jumped at the chance to work with Marty Leonard in Maryland, a jockey agent Anderson steered him towards.

Mind you, the young Butterfly freely admitted he had no idea who Ron Anderson was or his stature in racing as the agent for last year’s Eclipse Award-winning jockey, Joel Rosario.

One of Bryson’s first mounts secured by was on a horse trained by Laurel-based Lacey Gaudet. “There’s another ‘bug’ rider here that we had named on a horse and he had another obligation in a race,” recalled Gaudet. “Marty asked us to put Bryson on a horse, and we did so sight unseen. 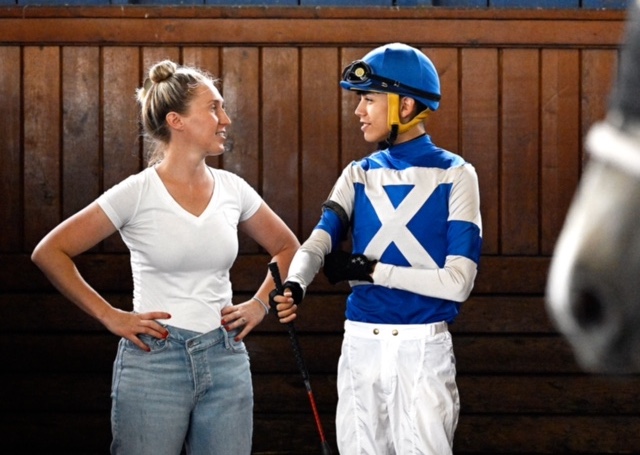 Maryland-based trainer Lacey Gaudet (left) with Bryson Butterfly: ‘He was just a kid and he just came into the paddock with a lot of conviction and confidence,” she said. Photo: Maryland Jockey Club / Jim McCue

“The horse was one we really liked but had been a little unlucky with,” the trainer went on  “Bryson went gate to wire and rode a helluva race on him. He put a beautiful ride on the horse. The horse listened to everything he asked him to do.”

‘A lot of conviction and confidence’

Even before the ride, Gaudet was impressed. “He was just a kid, like 16, and he just came into the paddock with a lot of conviction and confidence, knowing what he was going to do.”

Gaudet has continued to be both a fan and a customer of the young rider. She observed that he doesn’t ride recklessly, an unfortunate characteristic of a lot of ‘bug riders’, as apprentices are called in the US, anxious to win races. “He knows where he is at all times,” said Gaudet. “Maybe it’s not the right move today but when he comes back, he’s honest. He’s always trying to improve.”

Butterfly lost his apprentice weight allowance with a win on June 15 that qualified him as a journeyman. “I’m just riding for the little barns right now,” he said. “Most of the time, if you’re going well for them, they’ll keep you on even if you do lose your bug, which is what is happening right now. I’m still doing good for them, still hitting the board, so they keep putting me on.”

Bryson’s long-range goals are beyond the borders of Maryland and maybe even beyond the US.  “I like Maryland and I’d like to stay here and ride here, but the big dream is to go out of the country,” he said. “If I could ride in Japan or Korea or somewhere, just somewhere else would be a dream come true.”

The young man is largely unaware of his status as one of a small handful of native American riders. He is, however, aware of a native American horse culture far larger than the more well-known and storied bush-track racing dominated by Cajuns in South Louisiana.

Take the racing path less traveled and you may discover the aforementioned Indian relay races, centered primarily with the Blackfeet tribe in Montana. A rider rides one lap with three horses around an oval, leaping off his or her horse after one lap and quickly mounting another.

he horse’s speed is just one-half of the equation in winning; the agility of a rider in changing mounts is the other. The race is not always to the fastest three horses collectively, but to the most agile and acrobatic jockey. A wildly entertaining spectacle, this hybrid form of the sport has been featured at a ‘proper’ racetracks such as Emerald Downs near Seattle and Canterbury Park in Shakopee, Minnesota.

Bryson’s brother Preston rides Indian relays – and has also had some experience as a jockey in conventional racing. “Blackfeet native Americans were Plains Indians riding flat ground,” explained Bryson, who has family links to that Montana community.

Meanwhile, Bryson’s mother is looking to the future and reckons Bryson can help introduce young native Americans, already gifted riders, to jockeying. Jose Corrales, a former jockey who rode in the Northwest and who now trains in Maryland, wants to use Bryson at jockey schools, according to Nelson. “We can broaden the horizons for these kids,” she said. “There’s more to life beyond the reservation,” she added.

It is a profound truth that Bryson most definitely has discovered. It is also quite likely that the racing world will discover him in the not-too-distant future.